As the College celebrated it’s 90th Anniversary in 2018, we would like to share snippets of our history with you.

This photo is of the original Loreto Coorparoo building. It is situated on land purchased by the Deshon family in 1885. The house was built in 1889 and was named “Kemendine.” The Deshon family lived there for almost forty years, until it was purchased by Archbishop Duhig. In September 1927 two Loreto Sisters visited Brisbane and agreed to establish a school on the site in Cavendish Rd.  In December 1927 six Loreto Sisters came and prepared the house. In January these six sisters returned south and were replaced by five sisters who constituted the first Loreto community at Coorparoo. The Loreto Sisters purchased the house and 3 acres of land for 4,500 pounds. The building became known as the “Pink Building” until it was demolished in January 1977. It stood adjacent to the “Casket Building” where the “rotunda” now stands. The original Loreto Coorparoo building, “Kemendine”, was built by Edward Deshon and his wife Emily Marion Sawyer in 1889. The house was sold to the Catholic Church three years after Edward’s 1924 death but the Deshon family connection with Loreto was maintained. There was a later Loreto purchase of another Deshon property on Cavendish Road, multiple inter-generational Deshon children attended Loreto and John Deshon, architect and a past pupil of Loreto junior school, designed the current Gonzaga Barry Building, including the Chapel. It was in honour of this ongoing connection that the 1994 redevelopment of the Loreto landscape fronting Cavendish Road was named the “Deshon Oval”. 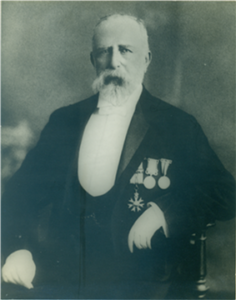 Front of the College in the early 1960s. Current site of Deshon Oval The unusually named “Casket Building”, the oldest extant Loreto Coorparoo building, stands in the the middle of the school’s grounds.

The ground and first floor of the building were built in 1931 adjacent to the pre-existing “Kemendine”. The “Casket Building” is so named as it was built from the 5000 pounds winning proceeds of the Golden Casket in 1929. The winning ticket had been gifted to the Sisters by Alice Cummins, a past pupil from Loreto Adelaide and a friend of Mother Crescentia Collins, Superior of the Coorparoo community of Loreto Sisters.

Over the years the casket building has housed a boarding-school dormitory, the boarder’s dining room, the nun’s kitchen, bathrooms, offices, classrooms, a drama room.

Loreto College Coorparoo commenced in February 1928 with an enrolment of seven students, pictured below. By 1932 the number of students had increased to 42 students, pictured below. A few eclectic anecdotes of individuals in this group of 1932 students include one going on to star in films in Hollywood and England, another becoming the archivist at Loreto Coorparoo, two becoming Loreto Sisters and another receiving an MBE and working as personal secretary to Senator Flo Bjelke-Petersen.

#5 – The Early Sisters At Loreto Coorparoo

In December 1927 six Loreto Sisters came and prepared the property “Kemendine” for the opening of the school in 1928.  In January these six sisters returned south and were replaced by five sisters who constituted the first Loreto community at Coorparoo. This community was led by Mother Crescentia Collins who was accompanied by Mother Bonaventure, Mother Paula, Mother Pia and Sister Ambrose. Sisters Who Lived And Worked In Brisbane Loreto 1928-1959